Picking locks in Thief is boring. Either a lock can be picked, or it can’t. And if it can, it’s just a matter of waiting until it’s finished. Unless there’s a guard in the area, picking locks can really drag a game down.

But little-used in Dromed 2 is a different kind of lock-picking, the Advanced Pick System. Advanced lock-picking is expanded from just three stages to eight. And the result of picking a stage can be progress forward or backward. Stages are also defined by time in milliseconds, instead of the confusing “pins” and “time percentage”.

Setting up an advanced lock is done with three editors: AdvPickStateCfg, AdvPickTransCfg, and AdvPickSoundCfg. They can all be found under Dark Gamesys. 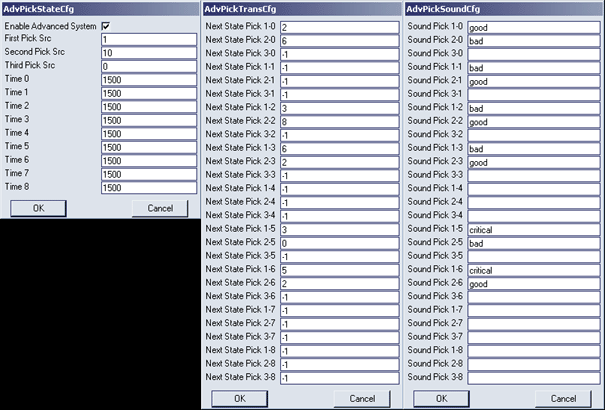 This is the first thing you add when you want to set up an advanced lock. Check the Enable Advanced System box, and specify the source bits of the lockpicks you want to use. Only three lockpick sources can be used to pick a single lock, but you can have up to 32 different lockpicks in a mission. Lockpicks are asigned a bit that identifies them. When specifying which lockpicks can be used to pick a lock, you combine all the bits together. So if you have three lockpicks: 1, 10, and 100, you can have the first pick source work with the first and second lockpicks by entering 101, and the second pick will work for the second source by entering 10. You also must specify how long it takes to pick each stage. Enter the time in milliseconds.

The real work is done with this editor. There are eight locked stages, 0-7, and one unlocked stage, stage 8. The lock starts at stage 0. When you use a particular lockpick in the current stage, the lock moves to the stage specified. The first box is for the first lockpick at stage 0. Next is the second lockpick at stage 0, then the third lockpick at stage 0. The next three boxes are for stage 1, then stage 2, etc. When stage 8 is reached, the lock is open, so the lockpick settings for it don’t matter. Picking a stage can go to any other stage, and you don’t have to fill in the stages in order. Entering -1 makes that lockpick ineffective at that stage. A stage that’s all -1 is a dead-end.

This editor lets you set a sound that is made while the lock is being picked. The purpose is so the player can receive a hint as to which pick is the “right” one to use. The layout is similar to that of AdvPickTransCfg, and the name of the sound is the LockState schema tag. Possible values are locked, unlocked, good, bad, critical, and bland. Locked and unlocked aren’t really meant to be used as picking indicators. However, the sounds for good, bad, and critical aren’t included by default. If you want to use these sounds you have to create them yourself; they’re named lockgood.wav, lockbad.wav, and lockcrit.wav. 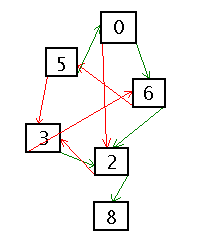 Using advanced lock-picking can be very complicated. The path from locked (stage 0) to unlocked (stage 8) can go backward, forward, loop back on itself, and even reach a dead-end. Before typing values in the editor, you may find it useful to draw a diagram showing how each stage connects to the other stages.

Most importantly, you have to be mindful of how difficult the advanced system is to the player. You should use complicated locks very sparingly. Keep most of them simple, with no backward movement. Or just use the regular type of lockpicks for normal things such as doors and small boxes. Save the advanced system for high-security uses, like a bank safe. Players will also appreciate hints that suggest those locks are more difficult, like a note written in a book. And if the lock is extremely complicated, leaving a hint on what steps will unlock it may be a good idea. You should rarely use a lock that dead-ends. And never do so when there’s no other way to open the lock.

On objects that support it, each stage in the lock will appear as a degree of rotation in some joint. For example, the handle of a door or the bar on a standard lockbox. So stage 1 is only slightly turned from stage 0, stage 4 is turned half-way, and stage 7 is almost to the unlocked position. Use this to your advantage to let the player know how far he’s progressed. The amount the lock turns after picking a stage should be comparable to how much time was spent picking it. If it took almost three seconds to pick a stage, it should move more than just one stage forward. Nor would it make sense for a very brief stage to turn almost all the way. In particular, while picking the lock the player should be able to judge how much more work has to be done. When a lock is at stage 7, and the player hears footsteps approaching, he might risk staying where he is and finish picking the lock just in time to avoid the guard. When it works, it increases the excitement, and thus the enjoyment of the game. But when picking the lock takes longer than it appears, and the player gets caught, the game is frustrating and not as fun.