This tutorial demonstrates how to retexture a brush ingame. Only the specified texture will be changed.

To begin, we need to create a marker, or any other object with no scripts – such as a table – nearby the area you want to retexture. Let’s rename it TexChangePoint. Add the EngineFeatures→Retexture Radius property, and enter the maximum distance from this object that textures will be changed. Note that the whole surface is always retextured.

If you want only half a wall retextured, you have to make the wall out of of two brushes. Next, we have to give it the script. Add S→S→Scripts and enter the script in Script 0. What script to enter depends on which version of Thief you are using:

There is no default script to do this in System Shock 2.

Finally, change Script→TerrReplaceOn to the name of the texture you want the first texture to be replaced with.

The only other thing that remain to do is to create a BigFloorLever (-446) or similar object and give it a ControlDevice link to the newly created TexChangePoint.

Your newly created object’s properties should look like this: 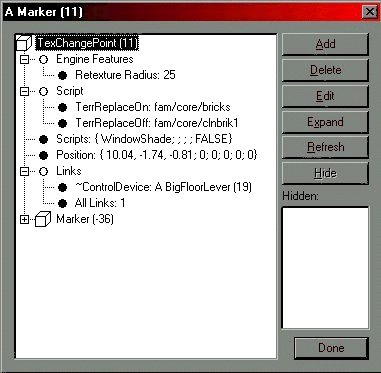 Bear in mind that this changed texture will remain in place until the mission is portalised or the texture trap is turned off ingame, even if you save and reload the mission.